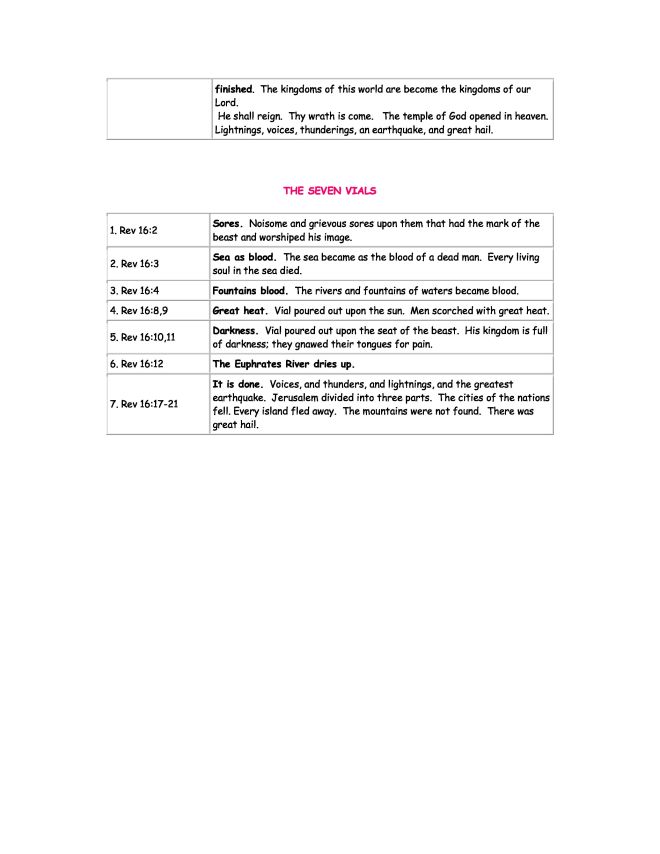 Many say the word Rapture is not in the Bible, it is in the Vulgate Version.

The above timeline chart is based on a Pre-Tribulation Rapture.

During the reign of Jehoshaphat, a vast army assembled to attack the nation of Judah. His response to the situation can guide us in handling our own crises.

The Bible records that the king “turned his attention to seek the LORD” in prayer (v. 3). Likewise, when we face hardship, our best response is to cry out to our heavenly Father. As God’s children, we can be certain that He loves us and cares about the details of our lives.

Through the cross, God established a new covenant for those who place their trust in the Lord Jesus (Luke 22:20)—He agreed to forgive our sins, adopt us into His family, and watch over us. This salvation depends not upon our good actions but upon the completed work of Jesus, who died in our place (Eph. 2:8). God also sent His Spirit to live in us as proof of our salvation and to be ever-present with us. He is interested in every aspect of our lives and promises to hear our prayers.

Jehoshaphat was ready for this crisis because he had developed the habit of seeking the Lord in various situations. If we want to be prepared for the unexpected, then we must discipline ourselves to seek God every day, acknowledging both His Lordship and our dependence upon Him.

By examining our habits and thought life, we can know whether our attention is on the Lord or other things. If we start our day thinking about Him instead of our own plans, and regularly read and apply Scripture, then we demonstrate a heart that is pursuing Him.

“It is he that sitteth upon the circle of the earth, and the inhabitants thereof are as grasshoppers; that stretcheth out the heavens as a curtain, and spreadeth them out as a tent to dwell in.” (Isaiah 40:22)

The discovery that the world is round is considered one of man’s greatest scientific achievements, often wrongly attributed to Christopher Columbus. Columbus was, indeed, a courageous thinker and explorer, as well as a Bible-believing Christian, but many scholars had long before so concluded, and many people had already migrated to the New World.

As far as the sphericity of the earth is concerned, the “flat-earth” myth of the Middle Ages was not the belief of many scholars of antiquity. The Bible, in particular, never hints of a drop-off point at the earth’s edge or any such notion as that. Its few references to “the four corners” of the earth (e.g., Isaiah 11:12) literally mean “the four quarters of the earth”—that is, the four quadrants of the compass.

In our text for the day, the word for “circle” is translated “compass” in Proverbs 8:27: “[God] set a compass upon the face of the depth” (same as “deep,” referring to the ocean). Other occurrences are in Job 26:10: “He hath compassed the waters with bounds, until the day and night come to an end,” and Job 22:14: “[God] walketh in the circuit of heaven.” All of these passages are best understood in terms of a spherical earth, with its basic shape at sea level determined by its ocean surface as controlled by gravity. The Hebrew word itself (khug) basically means a circle. Any vertical cross-section through the earth’s center is a “great circle,” of course, with any “straight” line on the ocean surface actually representing an arc of such a circle.

This is only one of many “pre-scientific” insights of the Bible written by divine inspiration long before the rise of modern science. HMM

NOT what I am, O Lord, but what Thou art!
That, that alone can be my soul’s true rest;
Thy love, not mine, bids fear and doubt depart,
And stills the tempest of my tossing breast.
HORATIUS BONAR.

WHEN you go to prayer, your first thought must be: The Father is in secret, the Father waits me there. Just because your heart is cold and prayerless, get you into the presence of the loving Father. As a father pitieth his children, so the Lord pitieth you. Do not be thinking of how little you have to bring God, but of how much He wants to give you. Just place yourself before Him, and look up into His face; think of His love, His wonderful, tender, pitying love. Tell Him how sinful and cold and dark all is; it is the Father’s loving heart will give light and warmth to yours. ANDREW MURRAY.

God is not found in multiplicity, but in simplicity of thoughts and words. If one word suffice for your prayer, keep to that word, and to whatever short sentence will unite your heart with God. MARGARET MARY HALLAHAN.

Understanding what the will of the Lord is. It is not the will of your Father which is in heaven, that one of these little ones should perish.

This is the will of God, even your sanctification. — That he no longer should live the rest of his time in the flesh to the lusts of men, but to the will of God. — Of his own will begat he us with the word of truth: wherefore lay apart all filthiness.

Be ye holy; for I am holy. — [Jesus] said, Whosoever shall do the will of God, the same is my brother, and my sister, and mother. — Whosoever heareth these sayings of mine, and doeth them, I will liken him unto a wise man, which built his house upon a rock: and the rain descended, and the floods came, and the winds blew, and beat upon that house; and it fell not: for it was founded upon a rock. — The world passeth away, and the lust thereof: but he that doeth the will of God abideth for ever.

From the first day that thou didst set thine heart to understand, and to chasten thyself before thy God, thy words were heard. Daniel 10:12

Thus saith the high and lofty One that inhabiteth eternity, whose name is Holy; I dwell in the high and holy place, with him also that is of a contrite and humble spirit, to revive the spirit of the humble, and to revive the heart of the contrite ones. — The sacrifices of God are a broken spirit: a broken and a contrite heart, O God, thou wilt not despise. — Though the LORD be high, yet hath he respect unto the lowly: but the proud he knoweth afar off. — Humble yourselves therefore under the mighty hand of God, that he may exalt you in due time. — God resisteth the proud, but giveth grace unto the humble. Submit yourselves therefore to God.

Thou, Lord, art good, and ready to forgive; and plenteous in mercy unto all them that call upon thee. Give ear, O LORD, unto my prayer; and attend to the voice of my supplications. In the day of my trouble I will call upon thee: for thou wilt answer me.