Song by Sandi Patti. The lyrics will help you understand clearly the suffering of Jesus Christ and why He did it for you.

He could have walked away.But he thought we were worth it.﻿ 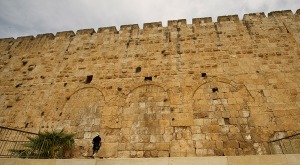 Singapore’s first Prime Minister, Lee Kuan Yew, is the man credited with making Singapore what it is today. During his leadership, Singapore grew to be rich and prosperous and one of the most developed nations in Asia. Asked if he ever felt like giving up when he faced criticism and challenges during his many years of public service, he replied, “This is a life-long commitment.”

Nehemiah, who led in the rebuilding of the wall of Jerusalem, refused to give up. He faced insults and intimidation from the enemies all around him as well as injustices from his own people (Neh. 4–5). His enemies even insinuated that he had a personal agenda (6:6-7). He sought help from God while taking every defensive step he could.

Despite the challenges, the wall was completed in 52 days (6:15). But Nehemiah’s work was not complete. He encouraged the Israelites to study the Scriptures, to worship, and to keep God’s law. After completing 12 years as governor (5:14), he returned to make sure his reforms were continuing (13:6). Nehemiah had a life-long commitment to leading the people.

We all face challenges and difficulties in life. But as God helped Nehemiah, He will also strengthen our hands (6:9) for the rest of our lives in whatever tasks He gives to us. By C. P. Hia

Dear Lord, sometimes it’s easy to get discouraged
when faced with criticism or challenges. Help
me to persevere and grant me the strength to be
faithful to what You have called me to do.

Life’s challenges are designed not to break us but to bend us toward God.

Think about your most recent prayer to the Lord. Did you spend as much time praising Him as you did making requests?

In our selfish society, many people even attend church to get needs met: Singing helps emotions, sermons “feed the flock,” and the choir entertains. It is possible to let our own preferences overshadow the Creator’s primary purpose for our lives—namely, to exalt Him.

Praise both magnifies and pleases the Lord, but we actually benefit from the practice as well. First, adoration of God modifies our estimation of “self”—it’s impossible to truly elevate God while clinging to pride. Instead, we come to recognize our sin, weakness, and need of Him. As Scripture tells us, the Lord’s power is manifest when we show genuine humility (2 Cor. 12:10).

Next, praise appropriately humbles us, as it is a reminder of God’s greatness and our dependence upon Him. But at the same time, exalting Him strengthens our sense of assurance, thereby increasing our faith. Then we are able to look beyond ourselves and our circumstances to see life from God’s perspective. And consider one additional benefit of praise that involves our physical bodies: When we focus on Jesus’ goodness, tension leaves and we find new strength. All these supernatural effects of exaltation are possible because as we lift up His name, God is present—Psalm 22:3 tells us that He inhabits the praise of His people (KJV).

Think about the Lord’s attributes and His work in your life. What can you praise Him for today?

“They shall say to me, What is his name? what shall I say unto them? And God said unto Moses, I AM THAT I AM: and he said, Thus shalt thou say unto the children of Israel, I AM hath sent me unto you.” (Exodus 3:13-14)

Moses had been specially trained by God for the task ahead. He had been raised in Pharaoh’s household and had no doubt learned the wisdom of Egypt. Moses was well acquainted with authority, both exercising it and submitting to it. It comes somewhat as a surprise, then, that when told by God that he would be the one to lead his people out of bondage, he both objected to assuming such a leadership role and even questioned God’s authority over the situation.

But when he first realized that he couldn’t talk God out of using him, Moses expressed doubt as to God’s ability to bring this about. He asked God for more proof of His authority over mankind, evidently feeling that merely being “the God of thy father, the God of Abraham, the God of Isaac, and the God of Jacob” (3:6) was insufficient authority. He couched his question in a roundabout way, claiming that the unbelief of the people of Israel was such that “they” would want to know, but this was not the case at all. When Moses first explained God’s plan to the “elders of the children of Israel” (4:29), “they bowed their heads and worshipped” (4:31).

God graciously answered Moses with the wonder-filled declaration “I AM THAT I AM.” He is the self-existent One. He is, simply because He is. No one made Him. He made all else that is, including Moses and the Egyptians. This assurance empowered Moses for forty years and should be enough to empower us. “I am the LORD, and there is none else, there is no God beside me: I girded thee, though thou hast not known me: That they may know from the rising of the sun, and from the west, that there is none beside me. I am the LORD, and there is none else” (Isaiah 45:5-6). JDM

I dwell in the high and holy place, with him also that is of a contrite and humble spirit, to revive the spirit of the humble, and to revive the heart of the contrite ones. —Isaiah 57:15

I have been thinking recently about how important my thoughts are. I don’t have to do wrong to get under blistering conviction and repent. I can lose the fellowship of God and sense of His presence and a sense of spirituality by just thinking wrong. God has been saying to me, “I dwell in your thoughts. Make your thoughts a sanctuary in which I can dwell. See to it.” You can’t do anything with your heart—that is too deep—but you can control your thoughts….

Your theology is your foundation. The superstructure is your spiritual experience built on that foundation. But the high bell towers where the carillons are—those are your thoughts. And if you keep those thoughts pure the chimes can be heard ringing out “Holy, Holy, Holy” on the morning air.

Make your thoughts a sanctuary God can inhabit, and don’t let any of the rest of your life dishonor God. See to it that not a foot of ground is unholy. See to it that every hour and every place is given over to God, and you will worship Him and He will accept it.

May my thoughts be a sanctuary, Father, where You can dwell comfortably. Amen.

… So now also Christ shall be magnified in my body, whether it be by life, or by death. For to me to live is Christ, and to die is gain. Philippians 1:20, 21

The witness of the Christian church is most effective when she declares rather than explains, for the gospel is addressed not to reason but to faith. What can be proved requires no faith to accept and faith rests upon the character of God, not upon the demonstrations of laboratory or logic.

The power of Christianity appears in its antipathy toward, never in its agreement with, the ways of fallen men. At the heart of the Christian system lies the cross of Christ with its divine paradox and the truth of the cross is revealed in its contradictions.

The cross stands in bold opposition to the natural man. Its philosophy runs contrary to the processes of the unregenerate mind, so that Paul could say bluntly that the preaching of the cross is to them that perish foolishness. To try to find a common ground between the message of the cross and man’s fallen reason can only result in an impaired reason, a meaningless cross and a powerless Christianity!

Note this also about the cross-carrying Christian: when he looks at the cross he is a pessimist, for he knows that the same judgment that fell on the Lord of glory condemns in that one act all nature and all the world of men. He rejects every human hope out of Christ because he knows that man’s noblest effort is only dust building on dust.

Yet he is calmly, restfully optimistic, for the resurrection of Christ guarantees the ultimate triumph of good throughout the universe. Through Christ, all will be well at last and the Christian waits the consummation!

And they said, Believe on the Lord Jesus Christ, and thou shalt be saved. ACTS 16:31

I object to the charge that “Tozer preaches experience.” I preach Christ, the Savior—that is my calling! But I am positive about the validity, the reality and the value of genuine Christian experience. We can talk to Jesus just as we talk to our other friends.

As a boy, I was not a Christian. I did not have the privilege of growing up in a home where Christ was known and loved. God spoke to me through a street preacher who quoted the words of Jesus, “Come unto me, all ye that labour and are heavy laden, and I will give you rest” (Matthew 11:28).

That invitation let me know that Jesus is still calling “Come now!” I went home and up into the attic. There in earnest prayer I gave my heart and life to Jesus Christ. My feet had taken me home and into the attic. But it was my heart that went to Jesus! Within my heart I consented to go to Jesus. I have been a Christian ever since that moment.

Dear Jesus, I want to thank You for saving me through Your difficult journey to the cross. Give me grace and strength to honor Your sacrifice through my life this week.