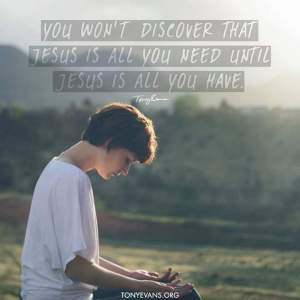 Matthew 6:33 – But seek first the kingdom of God and his righteousness, and all these things will be added to you.

Paul Washer reads from a journal of how God provided every need HeartCry had. God is so good indeed. 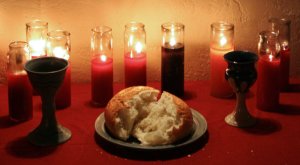 I love gathering around the table, enjoying a good chat with friends and family and talking about a multitude of topics. However, instant technology has made it difficult. Sometimes we are more concerned about what others—sometimes miles away—have to say than what the person just across the table is saying.

We have been invited to another meal at the table when we come together in one place to celebrate the Lord’s Supper. It’s not about the church, if it’s big or small. It’s not about the type of bread. It’s about turning off our thoughts from our worries and concerns and focusing on Jesus.

The Lord’s Supper—communion—is a time to remember the life, death, and resurrection of Jesus. Paul writes to the Corinthian believers to remind them not to partake of this supper in an “unworthy manner” (v. 27). The ESV Study Bible explains: “When the Corinthians observe the Lord’s Supper they are not rightly representing the sacrificial death of Christ (vv. 24,26) and the true character of the Lord. . . . The few who are wealthy in Corinth (1:26) have no regard for those who are hungry or who have nothing, while others have too much and some even get drunk.” The practical application of Paul’s instruction culminates in verse 33: “Wait for one another.”

When was the last time we enjoyed being at the Lord’s Table? Do we enjoy His presence, or are we more concerned with what’s going on somewhere else? This is important, “for as often as you eat this bread and drink this cup, you proclaim the Lord’s death till He comes” (1 Cor. 11:26).

I want to learn, dear Lord, when I sit at Your Table, to concentrate only on Your great love and sacrifice for us. Help me to enjoy the fellowship of others as we remember together what Jesus did for us at Calvary.

Remembering Christ’s death gives us courage for today and hope for tomorrow.

This was not their first Passover Feast, but it would be their last with the Master. The disciples didn’t know that, though, when they gathered in the upper room for the meal. The seder reminded them of the lambs’ blood painted on their ancestors’ doorposts. The presence of that blood had saved the Jews from the death angel (Ex. 12:23 NLT) and convinced Pharaoh to let them leave Egypt and slavery. The disciples didn’t understand that their Rabbi was the sacrificial Lamb whose blood would soon be painted across their hearts. His blood would forever free them and us from slavery to sin and death.

As the meal was being served, Jesus stood up. All eyes followed Him as He took off His outer clothing and wrapped a towel around His waist. The men wondered what He was doing but didn’t dare ask. After filling a bowl with water, the Lord kneeled and began to wash the first disciple’s feet. Then He moved to the next one and the next.

Had Jesus lost His mind? They exchanged nervous glances and squirmed as their Master’s hands touched their feet. How could He debase Himself with such an intimate, lowly act? They’d never dream of doing such a thing. Please don’t, they wanted to say. Let a servant do this.

Peter, always the spokesman, tried to stop Him. Jesus assured him that someday he’d understand, but for now, the washing must be allowed. In that case, do my hands and head, too, Peter said. But Jesus pointed out that only his feet needed washing, since he had bathed already for the feast.

Jesus knew, of course, that one of these friends wasn’t clean. For three years, Judas had seen Jesus up close, serving, teaching, loving. But despite the privilege of witnessing all this firsthand, Judas had his own agenda and priorities. So with feet freshly washed by the hands of God, the betrayer would soon lead soldiers and religious officials to where they could arrest Him.

Jesus washed the disciples’ feet in order to set an example of love and service. When He said that disciples are not above their Master, He also had us in mind. With no earthly or cosmic reason to be humble, Jesus made Himself nothing and modeled humility for us. He commands us to do the same out of love for Him and others.

News like that can be as hard to swallow as the bitter herbs of the seder. Faced with a roomful of feet that need washing, how eager are we to take up our towels? Serving for us might mean driving an elderly friend to appointments, visiting regularly with the sick, helping a single mom with her children or home repairs. This Easter, may we reach out to others with eager hands and hearts washed clean by the blood of the Master.

“And he bearing his cross went forth into a place called the place of a skull, which is called in the Hebrew Golgotha.” (John 19:17)

The Hebrew word golgotha and the Latin word calvarie actually mean “skull.” The Romans had selected a place of execution outside Jerusalem (Hebrews 13:12) but near the city (John 19:20), near a public highway (Matthew 27:39), and easily visible from some distance away (Mark 15:40). This has led many to speculate that it was on a hill, as in the first verse of the well-loved hymn “The Old Rugged Cross.”

On a hill far away stood an old rugged cross,
The emblem of suffering and shame;
And I love that old cross where the dearest and best
For a world of lost sinners was slain.

Truly His cross involved great suffering: “Christ also suffered for us. . . . Who his own self bore our sins in his own body on the tree, that we, being dead to sins, should live unto righteousness: by whose stripes ye were healed” (1 Peter 2:21, 24). Likewise, it involved great shame: “Christ hath redeemed us from the curse of the law, being made a curse for us: for it is written, Cursed is every one that hangeth on a tree” (Galatians 3:13). But this suffering and shame was not in vain, for as we see in both passages above, it was on our behalf. “Greater love hath no man than this, that a man lay down his life for his friends” (John 15:13).

However, God’s dearest and best, indeed God’s “only begotten Son” (John 3:16), was slain, not so much for “friends,” but for enemies! A world of lost sinners put Him on the cross. “But God commendeth his love toward us, in that, while we were yet sinners, Christ died for us . . . when we were enemies, we were reconciled to God by the death of his Son” (Romans 5:8, 10). So I’ll cherish the old rugged cross. JDM

Now when Daniel knew that the writing was signed, he went into his house; and his windows being open in his chamber toward Jerusalem, he kneeled upon his knees three times a day, and prayed, and gave thanks before his God, as he did aforetime. —Daniel 6:10

Thomas à Kempis says that the man of God ought to be more at home in his prayer chamber than before the public….

No man should stand before an audience who has not first stood before God. Many hours of communion should precede one hour in the pulpit. The prayer chamber should be more familiar than the public platform. Prayer should be continuous, preaching but intermittent.

It is significant that the schools teach everything about preaching except the important part, praying. For this weakness the schools are not to be blamed, for the reason that prayer cannot be taught; it can only be done. The best any school or any book (or any article) can do is to recommend prayer and exhort to its practice. Praying itself must be the work of the individual. That it is the one religious work which gets done with the least enthusiasm cannot but be one of the tragedies of our times.

Lord, I pray today that I might more and more be at home in my prayer chamber. Help me to pray with deeper commitment and
greater enthusiasm. Amen.

All things that the Father hath are mine: therefore said I, that he shall take of mine, and shall shew it unto you. John 16:15

God wants to communicate with us through the avenues of our minds, our wills and our emotions. The continuous and unembarrassed interchange of love and thought between God and the soul of the redeemed man is the throbbing heart of New Testament religion!

The intercourse between God and the soul is known to us in conscious personal awareness. It is personal: that is, it does not come through the body of believers, as such, but is known to the individual, and to the body through the individuals which compose it. And it is conscious: that is, it does not stay below the threshold of consciousness and work there unknown to the soul.

You and I are in little (our sins excepted) what God is in large. Being made in His image we have within us the capacity to know Him. The moment the Spirit has quickened us to life in regeneration our whole being senses its kinship to God and leaps up in joyous recognition. That is the heavenly birth without which we cannot see the kingdom of God!

It is, however, not an end but an inception. That is where we begin, but where we stop no man has yet discovered, for there is in the awful and mysterious depths of the Triune God neither limit nor end!

If we confess our sins, he is faithful and just to forgive us our sins. 1 JOHN 1:9

There is plain teaching throughout the Old and New Testaments concerning God’s willingness to forgive and forget. Yet there are segments of the Christian church which appear to be poorly taught concerning God’s clear remedy, through the atonement of Christ, for the believer who has yielded to temptation and failed his Lord.

God knows that sin is the dark shadow standing between Him and His highest creation, man. God is more willing to remove that shadow than we are to have it removed!

He wants to forgive us—and that desire is a part of God’s character. In the sacrificial death of a lamb in the Old Testament, God was telling us that one day a perfect Lamb would come to actually take away sin.

That is how and why God forgives sin now. In John’s words: “We have an advocate with the Father, Jesus Christ the righteous: And he is the propitiation for our sins” (1 John 2:1-2).

I am truly thankful, Lord, for Your constant willingness to forgive me when I stumble in my walk with You.