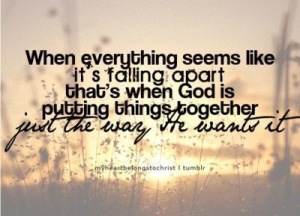 …in much patience, in tribulations, in needs, in distresses. —2 Corinthians 6:4

When you have no vision from God, no enthusiasm left in your life, and no one watching and encouraging you, it requires the grace of Almighty God to take the next step in your devotion to Him, in the reading and studying of His Word, in your family life, or in your duty to Him. It takes much more of the grace of God, and a much greater awareness of drawing upon Him, to take that next step, than it does to preach the gospel.

Every Christian must experience the essence of the incarnation by bringing the next step down into flesh-and-blood reality and by working it out with his hands. We lose interest and give up when we have no vision, no encouragement, and no improvement, but only experience our everyday life with its trivial tasks. The thing that really testifies for God and for the people of God in the long run is steady perseverance, even when the work cannot be seen by others. And the only way to live an undefeated life is to live looking to God. Ask God to keep the eyes of your spirit open to the risen Christ, and it will be impossible for drudgery to discourage you. Never allow yourself to think that some tasks are beneath your dignity or too insignificant for you to do, and remind yourself of the example of Christ inJohn 13:1-17.

Jesus journeyed into the deepest pit of despair hours before His crucifixion. In the Garden of Gethsemane, He repeatedly prayed for “the cup” to pass from Him (Matt. 26:39-44).

Christ was staring into a chalice of wrath and judgment that must have made His soul recoil (Isa. 51:17). Mankind had filled it with the most depraved deeds and thoughts that they could conceive. According to Scripture, Jesus Christ did not just die for our sin; He became our sin (2 Cor. 5:21). The holy, perfect Lamb of God took upon Himself all that was vile and dark.

Furthermore, Jesus knew the consequences of taking on mankind’s evil. God’s holiness prevented Him from being in the presence of sin. Therefore, the heavenly Father would have to separate Himself from the Son. Jesus had always enjoyed perfect oneness with God. To contemplate a wrenching rejection must have been terrifying and heartbreaking.

There was no question that Jesus would obey the will of God. He would become sin and be separated from the Father, if that’s what was required to save mankind. So, yes, in the garden, He pleaded for another route to our redemption. However, when it was clear that the Father’s answer was, No, this is the only way, Jesus obediently sacrificed Himself for us.

Jesus Christ sacrificed more than His life. He exchanged perfection for wickedness and holy union for separation. The Savior did this so we could be transformed into righteous men and women with an eternal future. No wonder all of heaven exalts Him (Rev. 5:11-14). We must do the same.

“And as they were eating, Jesus took bread, and blessed it, and brake it, and gave it to the disciples, and said, Take, eat; this is my body.” (Matthew 26:26)

This is the first of 12 specific references to the “breaking of bread” in the New Testament, each reminding the participants of Christ’s sacrificial death. Although Paul had not been present at the Last Supper, he had evidently received a special revelation concerning it. “For I have received of the Lord that which also I delivered unto you, that the Lord Jesus the same night in which he was betrayed [literally, ‘while he was being betrayed’] took bread: And when he had given thanks, he brake it, and said, Take, eat: this is my body, which is broken for you: this do in remembrance of me” (1 Corinthians 11:23-24). Similarly, drinking of the cup recalled to them His shed blood. All of this helped them remember and appreciate the great reality of eternal life imparted to them through His death, for He had said, “Whoso eateth my flesh, and drinketh my blood, hath eternal life” (John 6:54).

For a while after His resurrection and their empowering by the Holy Spirit, “they, continuing daily with one accord in the temple, and breaking bread from house to house” (Acts 2:46), seem to have combined each day this remembrance of the Lord’s supper with their own evening meals. Sometime later, it seems to have been “upon the first day of the week, when the disciples came together to break bread” (Acts 20:7).

There is no specific instruction in Scripture as to how often this breaking of bread should be observed, but when it is observed, the implied actions of “discerning the Lord’s body,” giving thanks to Him for His sacrifice for us, and “[judging] ourselves” (1 Corinthians 11:29, 31) are far more vital than the physical act of eating the broken bread. HMM

The heavens declare the glory of God; and the firmament sheweth his handywork. —Psalm 19:1

Consider why we think like we do in today’s society. We are participants in a new age— a scientific age, an atomic age, a space age. We have been conditioned by our sciences. No longer have we any great sense of wonder or appreciation for what God continues to do in His creation. Amid our complex engineering and technological accomplishments, it is difficult for us to look out on God’s world as we should.

As believers in God and in His plan for mankind, we must not yield to the philosophies that surround us. We have a God-given message to proclaim to our generation: The world was made by Almighty God. It bears the stamp of deity upon it and within it.

An architect leaves his stamp upon the great buildings he has designed. A notable artist leaves his mark and personality on his paintings. The same principle applies to the visible and invisible worlds.

Great Creator, Your stamp is so evident, yet I so often credit Your work to less noble sources. I bow in wonder and in worship before my Creator God. Amen.

As he reasoned of righteousness, temperance, and judgment to come, Felix trembled. (Acts 24:25)

We who rejoice in the blessings that have come to us through the Savior, need to bear in mind that the gospel is not good news only!

The message of the Cross is good news indeed for the penitent, but to those who obey not the gospel it carries an overtone of warning.

The Spirit’s ministry to the impenitent world is to tell of sin and righteousness and judgment. For sinners who want to cease being willful sinners and become obedient children of God, the gospel message is one of unqualified peace, but it is by its very nature also an arbiter of the future destinies of man.

Actually, the message of the gospel may be received in either of two ways: in word only without power, or in word with power.

The truth received in power shifts the bases of life from Adam to Christ—a new and different Spirit enters the personality and makes the believing man new in every department of his being!

Oh! how did heaven wonder! how did the stars stand still with astonishment! and how did the angels stay their songs a moment, when for the first time, God showed how he might be just, and yet be gracious! Oh! sinner, my heart hath devised it; my Son, the pure and perfect, shall stand in thy stead, and be accounted guilty, and thou, the guilty, shalt stand in my Son’s stead and be accounted righteous!” It would make us leap upon our feet in astonishment if we did but understand this thoroughly—the wonderful mystery of the transposition of Christ and the sinner.