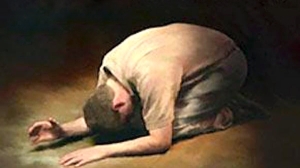 Our Lord replies to this statement of Peter by saying that this surrender is “for My sake and the gospel’s” (10:29). It was not for the purpose of what the disciples themselves would get out of it. Beware of surrender that is motivated by personal benefits that may result. For example, “I’m going to give myself to God because I want to be delivered from sin, because I want to be made holy.” Being delivered from sin and being made holy are the result of being right with God, but surrender resulting from this kind of thinking is certainly not the true nature of Christianity. Our motive for surrender should not be for any personal gain at all. We have become so self-centered that we go to God only for something from Him, and not for God Himself. It is like saying, “No, Lord, I don’t want you; I want myself. But I do want You to clean me and fill me with Your Holy Spirit. I want to be on display in Your showcase so I can say, ‘This is what God has done for me.’ ” Gaining heaven, being delivered from sin, and being made useful to God are things that should never even be a consideration in real surrender. Genuine total surrender is a personal sovereign preference for Jesus Christ Himself.

Where does Jesus Christ figure in when we have a concern about our natural relationships? Most of us will desert Him with this excuse— “Yes, Lord, I heard you call me, but my family needs me and I have my own interests. I just can’t go any further” (see Luke 9:57-62). “Then,” Jesus says, “you ‘cannot be My disciple’ ” (see Luke 14:26-33).

True surrender will always go beyond natural devotion. If we will only give up, God will surrender Himself to embrace all those around us and will meet their needs, which were created by our surrender. Beware of stopping anywhere short of total surrender to God. Most of us have only a vision of what this really means, but have never truly experienced it.

Glorifying the Lord is not limited to worshipping in church. In fact, praise should permeate the believer’s life.

One obvious way that we praise the Lord is with our voice. We can either speak or sing our worship. The psalmists put adoration into words and set their love to music. True worship also flows from the mouths of believers who are focused upon God’s attributes. They desire to honor Him because of who He is, what He has done, and what He has promised for the future.

Genuine worship allows the Lord to fill our hearts and minds with His presence. But praising the Lord with wrong motives is an empty act. For example, if we’re lifting our hands and singing loud only because doing so feels good, then what we’re after is an emotional high. That kind of selfish “praise” falls short of heaven.

Our God is praised when we serve Him. People are created for the purpose of bringing glory and honor to His name. Therefore, nothing should limit our willingness to work for the King, particularly when we have a chance to share Him with others. Christ is honored when His followers speak boldly about His grace and His work—believers’ testimonies are an amazing form of praise that magnifies God’s name.

Jesus Christ is worth more than any treasure this world offers. Loving Him and understanding what He’s done for you should be all the motivation you need to praise Him with your life. Don’t just sing; serve His kingdom and share the gospel. Help to make God’s throne room ring with worship.

“But of that day and that hour knoweth no man, no, not the angels which are in heaven, neither the Son, but the Father.” (Mark 13:32)

This verse has always been difficult to understand. If Jesus was God, how could He be ignorant of the time of His second coming? Indeed He was, and is, God, but He also was, and is, man. This is a part of the mystery of the divine/human nature of Christ. In the gospel record, we see frequent evidences of His humanity (He grew weary, for example, and suffered pain), but also many evidences of deity (His virgin birth, His resurrection and ascension, as well as His perfect words and deeds).

He had been in glory with the Father from eternity (John 17:24), but when He became man, “in all things it behoved him to be made like unto his brethren” (Hebrews 2:17), except for sin. As a child, He “increased in wisdom and stature” like any other human (Luke 2:52). Through diligent study (as a man), He acquired great wisdom in the Scriptures and the plan of God. After His baptism and the acknowledgment from heaven of His divine Sonship (e.g., Matthew 3:16-17), He increasingly manifested various aspects of His deity, but He still remained fully human.

With respect to the time of the end, this depends in some degree on human activity. For example, He said that “the gospel must first be published among all nations” (Mark 13:10), and only God the Father could foresee just when men will have accomplished this. Although the glorified Son presumably now shares this knowledge, in His self-imposed human limitations He did not.

In no way does this compromise His deity. In our own finite humanity, we cannot comprehend fully the mystery of the divine/human nature of Christ, but He has given us more than sufficient reason to believe His Word! HMM

My father was philosophical about many things and I remember that he used to sit during the summertime and ponder why God made the mosquitoes. I still do not have the answer, but I am just a human being, and just because I do not have that answer, I am not going to accuse the Creator of making a cosmic blunder. I know the mosquito is not a blunder—it is just a pest. But God made it.

The same principle is true of a great many other things. I do not know why God does some things, but I am convinced that nothing is accidental in His universe. The fact that we do not know the reason behind some things is not basis enough for us to call them divine accidents.

Lord, as I go about my day help me to remember that nothing happens by accident, but that everything is divinely controlled by Your eternal purpose. Amen.

The thinking of our generation often reflects a willingness to exchange a high view of God’s eternity for a short-term concept called “here and now.” Technology is presumed to be paramount but the answers science gives us are short-term answers.

The scientists may be able to keep us alive for a few extra years but believing Christians know some things that Einstein did not know!

For instance, we know why we are here. We can say why we were born. We also know what we believe about the value of things eternal.

We are thankful that we have found the promise from the God of all grace that deals with the long-term and the eternal. We belong to a company of the plain people who believe the truth revealed in the Bible.

Actually, the wisest person in the world is the person who knows the most about God; the person who realizes that the answer to creation and life and eternity is a theological answer—not a scientific answer!

When no eye seeth you except the eye of God, when darkness covers you, when you are shut up from the observation of mortals, even then be ye like Jesus Christ. Remember his ardent piety, his secret devotion—how, after laboriously preaching the whole day, he stole away in the midnight shades to cry for help from his God. Recollect how his entire life was constantly sustained by fresh inspirations of the Holy Spirit, derived by prayer. Take care cf your secret life: let it be such that you will not be ashamed to read at the last great day.