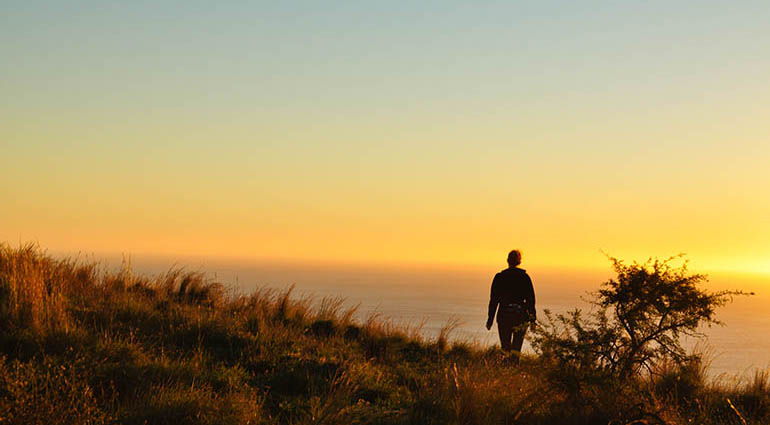 Praise the Lord, my soul, and forget not all his benefits. Psalm 103:2

Do you ever talk to yourself? Sometimes when I’m working on a project—usually under the hood of a car—I find it helpful to think aloud, working through my options on the best way to make the repair. If someone catches me in my “conversation” it can be a little embarrassing—even though talking to ourselves is something most of us do every day.

The psalmists often talked to themselves in the Psalms. The author of Psalm 116 is no exception. In verse 7 he writes, “Return to your rest, my soul, for the Lord has been good to you.” Reminding himself of God’s kindness and faithfulness in the past is a practical comfort and help to him in the present. We see “conversations” like this frequently in the Psalms. In Psalm 103:1 David tells himself, “Praise the Lord, my soul; all my inmost being, praise his holy name.” And in Psalm 62:5 he affirms, “Yes, my soul, find rest in God; my hope comes from him.”

It’s good to remind ourselves of God’s faithfulness and the hope we have in Him. We can follow the example of the psalmist and spend some time naming the many ways God has been good to us. As we do, we’ll be encouraged. The same God who has been faithful in the past will continue His love for us in the future.

Dear Lord, please help me to stay in touch with Your heart today by reminding myself of Your faithfulness and love.

Reminding ourselves about God’s goodness can keep us filled with His peace.

Salvation is a free gift of God. It comes to us through faith in His Son Jesus, who did everything necessary to accomplish our forgiveness and reconciliation with the Father. We can add nothing to this transaction; our job is simply to believe.

But from that point on, each one of us must make a choice: Will we follow Jesus or just coast along, doing what we want? If we limit our Christianity to merely sitting in a pew on Sunday mornings, we’ll miss the greatest adventure of our life. Being a disciple of Christ requires that we be actively engaged in our relationship with Him and in service to others.

Jesus never painted a rosy picture when He called people to follow Him. He stated quite plainly that becoming His follower would require self-denial, sacrifice, and suffering. With this kind of job description, it’s no wonder so many believers have tried to make Christianity a spectator sport. Following Jesus means that He directs our life—that’s what dying to self is all about. We give up our rights to do what we want and instead submit to His will, even if it is difficult or doesn’t align with our preferences. If you don’t realize how good, loving, and wise our God is, walking in His will may seem scary or even foolish.

But those who deny themselves to follow Jesus discover they lose nothing and gain everything. Even when His disciples are in a season of pain and suffering, the Lord gives them inner peace and a joy that transcends circumstances. Are you following Jesus or yourself? Your lifestyle, words, and attitudes reveal who truly rules your life.

There is disagreement as to the proper interpretation of this psalm of David. Its center section (vv. 6-20) consists of a strong denunciation and curse, while the beginning and ending sections petition God for judgment and deliverance (vv. 1-5, 21-31).

Most hold that David is speaking in both sections. If so, it is a bitter and vindictive spirit finding vent. “Let Satan stand at his right hand. . . . let his prayer become sin. Let his days be few. . . . Let his children be fatherless, and his wife a widow. Let his children be continually vagabonds, and beg: . . . Let the extortioner catch all that he hath. . . . Let there be none to extend mercy unto him” (vv. 6-12).

Others would claim that David is quoting the curse of his enemy directed toward him and point to the use of the singular personal pronouns “he,” “his,” and “him” used 30 times in 15 verses. Indeed, if this is the proper interpretation, the psalm becomes the plea of a persecuted man of God who entrusts his enemies’ judgment entirely to the Lord. “But do thou for me, Oh GOD the Lord, for thy name’s sake: because thy mercy is good, deliver thou me. For I am poor and needy, and my heart is wounded within me. . . . I became also a reproach unto them. . . . Let them curse. . . . I will greatly praise the LORD with my mouth; yea, I will praise him among the multitude. For he shall stand at the right hand of the poor, to save him from those that condemn his soul” (Psalm 109:21-22, 25, 28, 30-31).

Like his master who had come after him, “when he was reviled, reviled not again; when he suffered, he threatened not; but committed himself to him that judgeth righteously” (1 Peter 2:23). JDM

Thus saith the LORD, What iniquity have your fathers found in me, that they are gone far from me, and have walked after vanity, and are become vain? —Jeremiah 2:5

Now we were made to worship, but the Scriptures tell us something else again. They tell us that man fell and kept not his first estate; that he forfeited the original glory of God and failed to fulfill the creative purpose, so that he is not worshiping now in the way that God meant him to worship. All else fulfills its design; flowers are still fragrant and lilies are still beautiful and the bees still search for nectar amongst the flowers; the birds still sing with their thousand-voice choir on a summer’s day, and the sun and the moon and the stars all move on their rounds doing the will of God.

And from what we can learn from the Scriptures we believe that the seraphim and cherubim and powers and dominions are still fulfilling their design—worshiping God who created them and breathed into them the breath of life. Man alone sulks in his cave. Man alone, with all of his brilliant intelligence, with all of his amazing, indescribable and wonderful equipment, still sulks in his cave. He is either silent, or if he opens his mouth at all, it is to boast and threaten and curse; or it’s nervous ill-considered laughter, or it’s humor become big business, or it’s songs without joy.

Lord, somehow do today the much-needed work of bringing us out of our caves that we might be drawn to once again do what we were created to do. Amen.

God saw everything that he had made, and, behold, it was very good. (Genesis 1:31)

Without doubt, we have suffered the loss of many spiritual treasures because we have let slip the simple truth that the miracle of the perpetuation of life is in God!

Be assured that God did not create life and toss it from Him like some petulant artist disappointed with his work. All life is in Him and out of Him, flowing from Him and returning to Him again, a moving indivisible sea of which He is the fountainhead.

That eternal life which was with the Father is now the possession of believing men and women, and that life is not God’s gift only—but His very Self! The regeneration of a believing soul is but a recapitulation of all His work done from the moment of creation.

So, redemption is not a strange work which God for a moment turned aside to do: rather it is His same work performed in a new field, the field of human catastrophe!

Is, then, your calling a high calling? Has it ennobled your heart, and set it upon heavenly things? Has it elevated your hopes, your tastes, your desires? If man alone call thee, thou art uncalled. Is thy calling of God? Is it a call to heaven as well as from heaven? Unless thou art a stranger here, and heaven thy home, thou hast not been called with a heavenly calling; for those who have been so called, declare that they look for a city which hath foundations, whose builder and maker is God. Is thy calling thus holy, high, heavenly? Then, beloved, thou hast been called of God, for such is the calling wherewith God doth call his people.