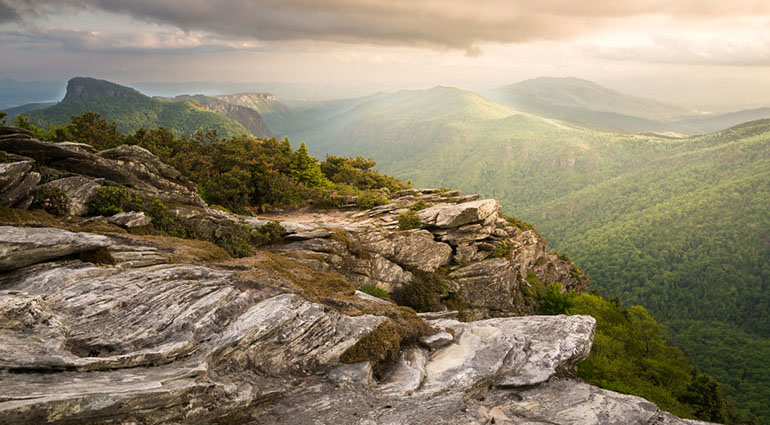 A large, illuminated cross stands erect on Table Rock, a rocky plateau overlooking my hometown. Several homes were built on neighboring land, but recently the owners have been forced to move out due to safety concerns. Despite their close proximity to the firm bedrock of Table Rock, these homes aren’t secure. They have been shifting atop their foundations—nearly three inches every day—causing risk of major water pipes breaking, which would accelerate the sliding.

Jesus compares those who hear and obey His words to those who build their homes on rock (Luke 6:47–48). These homes survive the storms. By contrast, He says homes built without a firm foundation—like people who don’t heed His instruction—cannot weather the torrents.

Lord, thank you for being my firm foundation.

On many occasions, I’ve been tempted to ignore my conscience when I knew God asked more of me than I had given, thinking my response had been “close enough.” Yet the homes in the shifting foothills nearby have depicted for me that being “close” is nowhere near enough when it comes to obeying Him. To be like those who built their homes on a firm foundation and withstand the storms of life that so often assail us, we must heed the words of our Lord completely.

Help me, Lord, to obey You fully and with my whole heart. Thank You for being my firm foundation.

God’s Word is the only sure foundation for life.

INSIGHT:To fully appreciate Jesus’s comments in Luke 6:46–49, it’s helpful to keep in mind the fuller content of His teachings in this chapter (see vv. 20–49). Luke 6 captures many of the same teachings found in the Sermon on the Mount (Matt. 5–7)—teachings that are revolutionary in cultures dominated by the powerful and where weakness is looked down on. Jesus invited His followers into God’s reality—where it is those who know their brokenness, the poor and persecuted, who God is especially near to (vv. 20–25), and where strength is demonstrated in forgiving even our enemies (vv. 27–36).

A temptation when hearing Jesus’s words is to be moved and inspired without wrestling with the ways His words demand change in our lives. Jesus knew that would be our tendency, and so He emphasizes that an emotional confession (“Lord, Lord,” v. 46) is of no value if we do not obey, if we do not let His words challenge the way we live and what we believe. Building our lives on Him means a life of daily transformation, of daily following Him.

What “norms” in your life do you think Jesus’s words might challenge?

For further study, see Studies in the Sermon on the Mount by Oswald Chambers at dhp.org/studies.