Four Burning Questions—If God Is for Us…

Some days we awaken to sunny skies. Other days are darker, and we’re gripped by pain. Whether the pain is physical or emotional, it can make us question God’s love and care for us.

But God counters our questions with some of His own—rhetorical questions—to remind us of His active involvement in our care. We find glorious sets of questions at the end of Job, in Isaiah 40, and scattered throughout the Lord’s ministry. But few passages exceed the interrogation of Romans 8, as Paul draws to a close in his theological instruction about justification by grace through faith.

What then shall we say to these things? If God is for us, who can be against us?… How shall He not with Him also freely give us all things? Who shall bring a charge against God’s elect … Who is he who condemns?… Who shall separate us from the love of Christ?

If your spirits are low today, answer the questions God sets forth. Who can be against you? No one! What can separate you from His love? Nothing!

When Jesus shows His smiling face, there is sunshine in my soul. Eliza Hewitt

Chris Tomlin – And if Our God is for Us 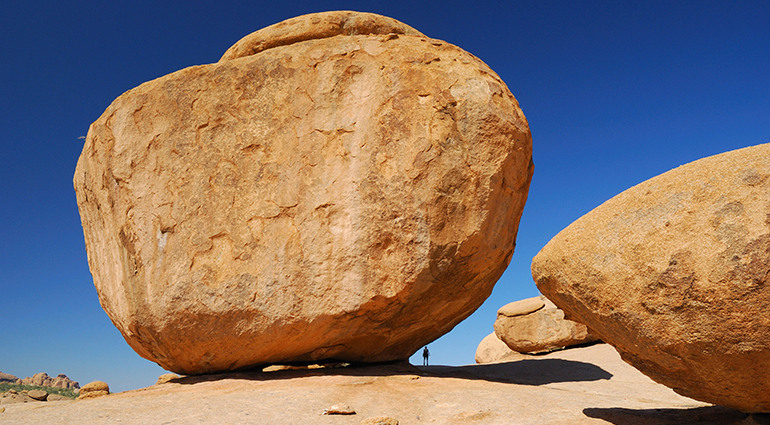 I call as my heart grows faint; lead me to the rock that is higher than I. Psalm 61:2

While shopping for a humidifier, I noticed an older woman walking back and forth down the aisle. Wondering if she was shopping for humidifiers also, I moved aside to allow her to draw near. Soon we chatted about a flu virus in our area, one that left her with a lingering cough and headache.

A few minutes later, she launched into a bitter tirade, expressing her theory about the origin of the virus. I listened, unsure what to do. She soon left the store, still angry and frustrated. Though she had expressed her frustration, I couldn’t do anything to take away that pain.

While God may not take away all our pain, we can rest in the peace He provides.

David, Israel’s second king, wrote psalms to express his anger and frustration to God. But David knew that God not only listened, He could also do something about his pain. In Psalm 61, he writes, “I call as my heart grows faint; lead me to the rock that is higher than I” (v. 2). God was his “refuge” (v. 3)—the “rock” to which David ran.

When we’re in pain, or come in contact with someone in pain, David’s example is a good one to follow. We can head to “the rock that is higher” or lead someone there. I wish I had mentioned God to the woman at the store. While God may not take away all our pain, we can rest in the peace He provides and the assurance that He hears our cry.

Father God, make me mindful of those in need of a listening ear and the hope of Your presence.

Rest on the Rock.

God’s care for His children is a constant theme throughout the Scriptures. Even though David felt abandoned by people at times, he repeatedly thanked God for His care for him (see Psalm 142). When we feel alone and abandoned, we too can have confidence in God and cast our anxiety on Him because He cares for us (1 Peter 5:7). Prayer is important, for it is in prayer that we pour out our concerns to Him, confident that in His time and wisdom He will respond. This confidence is at the heart of Paul’s challenge to the church at Philippi, “Do not be anxious about anything, but in every situation, by prayer and petition, with thanksgiving, present your requests to God” (Philippians 4:6). The resulting peace (v. 7) is His gift to us, carrying us through as we await His answers to our needs.

Are you facing a situation for which you need God’s help? Go to the Rock in prayer and rest in His peace.

If you are going to take instruction from someone, you want to be certain that person is well qualified, right? It’s interesting, then, that so many believers neglect the greatest Bible teacher available. We read religious books, survey friends, and ask a Sunday school class before we decide to get on our knees and consult the true Authority. While those sources can point us in the right direction, only the Holy Spirit illuminates God’s Word to our hearts and minds.

Asking someone to explain Scripture seems easier than seeking to understand it through the Spirit’s power. But consider what a person misses in bypassing Him. Who better to instruct believers about the Word’s depth and breadth than the One who wrote it? (See 2 Peter 1:20-21.) The Spirit laid His message on each human author’s heart, and the writers dutifully recorded it in their own unique voices.

Furthermore, as a member of the holy Trinity, the Spirit knows the mind of God (1 Corinthians 2:10). He is often called the Spirit of truth, because He understands everything. The Holy Spirit recognizes our emotional and mental state and can identify exactly where we are in our Christian walk. Therefore, He can reveal to our mind the passages that will encourage, challenge, or convict us as needed.

We have a teacher of divine quality. He will help us to learn and grow, guide us through difficult passages, and shed light on why the Lord allows certain challenges in our life. When it comes to aiding God’s people to know His Word, no one is more qualified than His Spirit.

Christians who complain about their circumstances would do well to ponder this sobering verse and its background. God had greatly blessed His people, Israel, delivering them supernaturally from slavery in Egypt, protecting them against their enemies—even miraculously supplying daily bread and water for them in the desert.

Still they complained—about their food, about the imaginary luxuries they had left behind in Egypt, and against their leaders. “And when the people complained, it displeased the LORD: and the LORD heard it; and his anger was kindled” (Numbers 11:1). Finally, when they complained about the manna, “the anger of the LORD was kindled greatly.” He sent them quail to eat in such abundance as to last “even a whole month, until it come out at your nostrils, and it be loathsome unto you.” Then, “while the flesh was yet between their teeth, ere it was chewed . . . the LORD smote the people with a very great plague” (Numbers 11:10, 20, 33).

God has blessed every Christian with forgiveness of sin and eternal life. He daily fulfills His promise to supply every need (not every desire, however), and we should live a thankful life in return, regardless of our particular lot in this world. “In every thing give thanks: for this is the will of God in Christ Jesus concerning you” (1 Thessalonians 5:18). “Let your conversation be without covetousness; and be content with such things as ye have: for he hath said, I will never leave thee, nor forsake thee” (Hebrews 13:5). “Do all things without murmurings and disputings” (Philippians 2:14). Complaining about what we don’t have may well result in God taking away what we do have—and still worse, sending leanness into our souls. HMM

To please his favourite, the king had doomed all the Jews to destruction: we can imagine the universal distress which it created.

He felt as if he had been the cause of the overthrow of his people, since it was for his sake that Haman had determined to massacre every one of them.

As well they might, since they were all doomed to die by the sword. The Lord’s people were in great jeopardy.

Evidence of the great danger of her race was supplied to her both by word of mouth and by the copy of the decree which she could read for herself. No one could now help the poor doomed nation but Esther; for her it would be a dangerous task, and she had no great measure of that high all-daring faith which had dwelt in some of her ancestors. Her position as queen, in an alien court, was not one which fostered the highest form of spiritual life.

Mordecai was sure that God would deliver his people in some way or other, and he warned Esther that if she missed the honour of being her nations deliverer, she would not herself escape, for the king’s edict would operate even in the palace.

If they would pray for her, she would venture. Surely, if she thus plucked up courage to approach a hasty, imperious tyrant, no penitent sinner need fear to come to God by Jesus Christ.

Thy church through every past alarm

In thee has found a Friend

And, Lord, on thine Almighty arm

We now for all depend.

Where your treasure is, there will your heart be also. (Luke 12:34)

Is the Lord Jesus Christ your most precious treasure in the whole world? If so, count yourself among “normal” Christians, rather than among “nominal” Christians!

My old dictionary gives this definition as the meaning of nominal:

Existing in name only, not real or actual; hence so small, slight, as to be hardly worth the name.

With that as a definition, those who know they are Christians “in name only” should never make the pretense of being normal Christians. Thankfully those who are “normal” are constantly being drawn to praise and worship, charmed by the moral beauty which is found only in Jesus.

I cannot understand how anyone can profess to be a follower and a disciple of our Lord Jesus Christ and not be overwhelmed by His attributes. Those divine attributes faithfully attest that He is indeed Lord of all, completely worthy of our worship and praise!

“I am come a light into the world, that whosoever believeth on me should not abide in darkness.” John 12:46

This world is dark as midnight; Jesus has come that by faith we may have light, and may no longer sit in the gloom which covers all the rest of mankind.

Whosoever is a very wide term: it means you and me. If we trust in Jesus we shall no more sit in the dark shadow of death, but shall enter into the warm light of a day which shall never end. Why do we not come out into the light at once?

A cloud may sometimes hover over us, but we shall not abide in darkness if we believe in Jesus. He has come to give us broad daylight. Shall He come in vain? If we have faith we have the privilege of sunlight: let us enjoy it. From the night of natural depravity, of ignorance, of doubt, of despair, of sin, of dread, Jesus has come to set us free; and all believers shall know that He no more comes in vain than the sun rises and fails to scatter his heat and light.

Shake off thy depression, dear brother. Abide not in the dark, but abide in the light. In Jesus is thy hope, thy joy, thy Heaven. Look to Him, to Him only, and thou shalt rejoice as the birds rejoice at sunrise, and as the angels rejoice before the throne.