Voices from Inside the Towers (9/11 Documentary)

BOATLIFT, An Untold Tale of 9/11 Resilience

America’s Future Is Not Written by Our Enemies’: Trump Commemorates 9/11 Anniversary, Honors Heroes 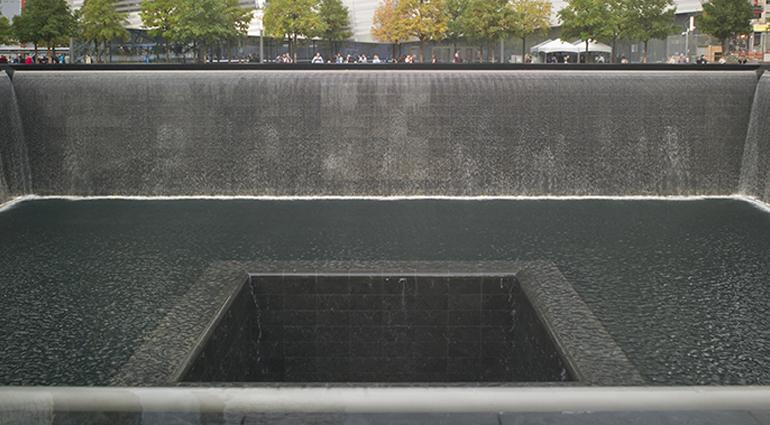 Do not fear, for I have redeemed you; I have summoned you by name; you are mine. Isaiah 43:1

During a visit to the National September 11 Memorial in New York City, I quickly photographed one of the twin reflecting pools. Around these two pools, the names of the nearly 3,000 people who died in the World Trade Center attacks are etched into bronze panels. Later, while looking more closely at the photo, my eyes were drawn to the hand of a woman resting on a name. Many people come to this place to touch a name and remember someone they loved.

The prophet Isaiah reminded God’s people of His unfailing love and concern for them, even though they had often turned away from Him. The Lord said, “Do not fear, for I have redeemed you; I have summoned you by name; you are mine” (Isaiah 43:1).

In the 23rd Psalm, David wrote, “Even though I walk through the darkest valley [the valley of the shadow of death], I will fear no evil, for you are with me . . . . Surely your goodness and love will follow me all the days of my life, and I will dwell in the house of the Lord forever” (vv. 4, 6).

God never forgets us. No matter where we are or whatever our situation, He knows our names and holds us fast in His unfailing love.

Father in heaven, thank You for calling us by name and surrounding us with Your love, today and forever.

God knows our names and He holds us fast in His love.

Psalm 23 describes God’s intimate love for us. We see the same theme in the New Testament. In John 10, Jesus described Himself as the “good shepherd” who lays down His life for the sheep (v. 11). But this is only one facet of His personal, intimate care for the flock. In verse 3 Jesus says, “He calls his own sheep by name and leads them out.” He calls His sheep “by name”! This is beautifully pictured on resurrection day. Mary Magdalene went to the tomb to mourn Jesus’s death and to complete the burial process (20:1–18). Finding the tomb empty, she wept (v. 11); and the risen Jesus came to her, asking questions that probed her heart. She failed to recognize Jesus—until He called her by name (v. 16). In that moment, she was aware that Christ Himself stood before her. No wonder Jesus said in John 10:27, “My sheep listen to my voice; I know them, and they follow me.” To be loved and known by God is one of salvation’s greatest gifts!

Seventeen years ago, the United States of America experienced a massive surprise attack by terrorists. Our people were shaken by the realization that the country is not as safe as we once thought.

Of course, it grieved us to learn of the events that occurred and the lives that were tragically lost. But at the same time, the horrible situation led to some positive outcomes. For example, our nation unified and people served with courage and selflessness.

One of the biggest benefits, I believe, was that many of us realized our great dependence upon God. Safety in this world is an illusion. Sadly, the peace and blessings we’ve experienced in America have led to much complacency and self-dependence. Sometimes we need to be shaken out of our forgetfulness and into reliance upon Jesus Christ.

Just listening to the news these days can rattle our sense of well-being. There is always something unsettling taking place. But as believers, we should look at life from a resurrection perspective. We are children of the living God, not people who seek security only in the natural, secular world. Our hope and refuge is firm: Through Jesus Christ, our relationship with the Lord is eternal. Everything else we possess could be destroyed in a moment.

Worldly circumstances—natural disasters, wars, and assorted turmoil—may have an effect on everyone, but they can’t control the believer’s heart. Let your hope rest in Christ alone. Only by finding security in the arms of almighty God can you endure times of uncertainty.

“He shall cover thee with his feathers, and under his wings shalt thou trust: his truth shall be thy shield and buckler. Thou shalt not be afraid for the terror by night; nor the arrow that flieth by day.” (Psalm 91:4-5)

Today we remember the unprovoked attack on America by Muslim terrorists. Despite attempts to make the country more secure, the threat remains scarcely abated. What should the Christian’s response be? In our text above, we see we have no cause for fear. The physical danger may be real, but our Lord promises protection in tender words likened to a mother bird’s care for her young. Our ultimate deliverance is guaranteed by His sure promises. Trust in His power and truth sustains us as surely as a shield and buckler.

Our hope cannot rest in military might. God does not promise temporal safety to all, for millions have succumbed to undeserved violence. Our last hope is of a different order, firmly grounded in “the LORD, which is my refuge” (v. 9). He responds to our trust and worship with the promise “with long [better translated as ‘eternal’] life will I satisfy him, and shew him my salvation” (v. 16). Much more interested in our response to troubles than in our deliverance, He desires us to believe and serve Him, trusting Him even in perilous times.

A New Testament application of this principle is in 1 Peter 3:14: “If ye suffer for righteousness’ sake, happy are ye: and be not afraid of their terror, neither be troubled.” The remedy? “But sanctify the Lord God in your hearts: and be ready always to give an answer to every man that asketh you a reason of the hope that is in you with meekness and fear” (1 Peter 3:15).

Jesus Christ is our example and inspiration. “For consider him that endured such contradiction of sinners against himself, lest ye be wearied and faint in your minds” (Hebrews 12:3). Fixing our eyes upon Him, we have no cause for fear. JDM

Probably at first they accepted Paul as a companion because of their common trade, and through his instrumentality were led to receive the common faith. It is well to turn association in business into a means for winning souls.

He felt more earnest than ever, and with greater vehemence pressed upon the Jews the duty of believing in Jesus.

If he could not go inside the synagogue, he yet remained as near to it as possible, that those who wished to hear might know where to find him.

Good news for the apostle. He was to preach fearlessly because the Lord intended to bless abundantly. Some have said, “If the Lord has an elect people, why need we preach to them?” but the answer is,—if the Lord had not determined to save some, preaching would certainly be in vain.

This was quite a long stay for him. During this time he probably wrote both the first and second epistles to the Thessalonians. His time was also well occupied in building up the Corinthian church, which became large and important. As the Christians worshipped next door to the Jewish synagogue, their growing numbers soon aroused the Jews, and they proceeded to prosecute Paul before the Roman proconsul.

He would not interfere in religious matters, but kept to his proper sphere, therein proving himself to be a far more enlightened ruler than many in modern times.

The Jews gained nothing by their attempt, but drew down upon themselves the indignation of the Gentiles. Gallio failed in his duty in not protecting Sosthenes from violence; though he was right in refusing to oppress the conscience of Paul, he was wrong in not securing the civil rights of his opponent. Happy will that day be when civil rulers neither overstep their sphere nor neglect their office. May God bless the Queen and all in authority over us.

What though earth and hell united

Should oppose the Saviour’s plan?

Plead his cause, nor be affrighted,

Fear ye not the face of man;

Hurt his work they never can.

Our gospel came not unto you in word only, hut also in power, and in the Holy Ghost, and in much assurance. (1 Thessalonians 1:5)

One marked characteristic of modern evangelicalism is its lack of assurance, resulting in a pathetic search for external evidence to corroborate its faith. It sets out bravely to declare its trust in Christ, but is shortly overawed by the counter declarations of science and philosophy and before long it is looking about for some collateral evidence to restore its confidence.

The faith of the Christian must rest upon Christ Himself. He is the mystery of Godliness, a miracle, and emergence of the Deity into time and space for a reason and a purpose. He is complete in Himself, and gains nothing from any human philosophy.

The New Testament points to Christ and says God now commands all men everywhere to repent: because He has appointed a day in which He will judge the world in righteousness by that Man He has ordained! Our assurance is the fact that He raised Him from the dead. In that, God validated forever the claims of Christ. He is who He said He was and what He said He was. So, Christ is enough! To have Him and nothing else is to be rich beyond all conceiving

This is as good as a promise. It has been good, it is good, and it will be good for me to bear the yoke.

Early in life I had to feel the weight of conviction, and ever since it has proved a soul-enriching burden. Should I have loved the gospel so well had I not learned by deep experience the need of salvation by grace? Jabez was more honorable than his brethren because his mother bare him with sorrow, and those who suffer much in being born unto God make strong believers in sovereign grace.

The yoke of censure is an irksome one, but it prepares a man for future honor. He is not fit to be a leader who has not run the gauntlet of contempt. Praise intoxicates if it be not preceded by abuse. Men who rise to eminence without a struggle usually fall into dishonor.

The yoke of affliction, disappointment, and excessive labor is by no means to be sought for; but when the Lord lays it on us in our youth it frequently develops a character which glorifies God and blesses the Church.

Come, my soul, bow thy neck; take up thy cross. It was good for thee when young, it will not harm thee now. For Jesus’ sake, shoulder it cheerfully.