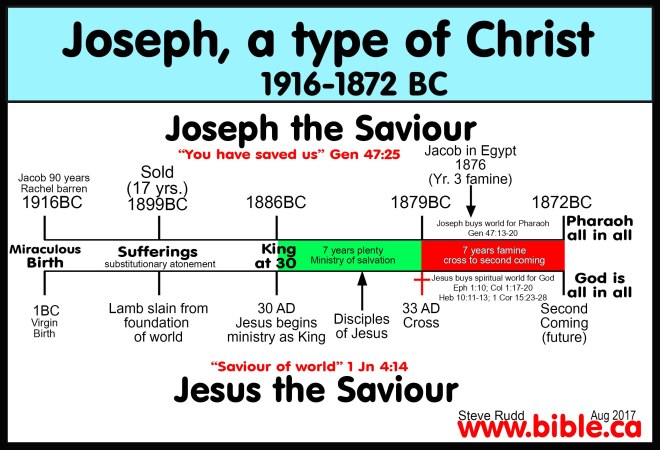 When Jacob saw that there was grain in Egypt, Jacob said to his sons … “Go down to that place and buy for us there, that we may live and not die.”  Genesis 42:1-2

History is replete with examples of connections—how “A” unexpectedly led to “B.” Sometimes connections are anticipated, but often they are a surprise. Something we think is insignificant can turn out to have a major impact on our life.

There was a problem in Canaan. Jacob was the patriarch of the family through whom God’s promises to Abraham would be fulfilled. But some of Jacob’s sons had strayed into immorality and sin, even selling one of their brothers into slavery. The future did not look good for the preservation of God’s channel of blessing to the world. Then a famine overtook the land, forcing Jacob’s sons to go to Egypt to buy grain. There they were reconciled with Joseph who invited the entire family to move to Egypt where he could keep them provisioned and safe. So, for four hundred years, Jacob’s family grew into the nation that returned to Canaan, their Promised Land.

God often uses events—even a famine—to accomplish great spiritual purposes. Be sensitive to the circumstances in your life; be on the lookout for spiritual connections.

God’s grace is sufficient for us anywhere His providence places us. Unknown

He will wipe every tear from their eyes.  Revelation 21:4

My supervisor is a huge fan of a certain college basketball team. This year, they won the national championship, so another coworker texted him congratulations. The only problem was my boss hadn’t yet had a chance to watch the final game! He was frustrated, he said, knowing the outcome beforehand. But, he admitted, at least when he watched the game he wasn’t nervous when the score stayed close to the end. He knew who won!

We never really know what tomorrow will hold. Some days can feel mundane and tedious, while other days are filled with joy. Still other times, life can be grueling, agonizing even, for long periods of time.

But despite life’s unpredictable ups and downs, we can still be securely grounded in God’s peace. Because, like my supervisor, we know the end of the story. We know who “wins.”

Revelation, the Bible’s final book, lifts the curtain on that spectacular finale. After the final defeat of death and evil (20:10, 14), John describes a beautiful victory scene (21:1–3) where God makes His home with His people (v. 3) and wipes “every tear from their eyes” in a world with “no more death or mourning or crying or pain” (v. 4).

On difficult days, we can cling to this promise. No more loss or weeping. No more what-ifs or broken hearts. Instead, we’ll spend eternity together with our Savior. What a glorious celebration that will be!

How can the hope of heaven give you strength? How might your favorite “happily ever after” story echo Revelation 21?

One day God will soothe every hurt, heal every wound, and wipe away every tear.

What are you pursuing in life? The answer is not found in what you think your goal is but in what you are actually doing. For instance, you may claim that the Lord Jesus has first place in your life, but are you actually pursuing Him above all else, or have you gotten sidetracked with your own desires?

This was the case with the Jews who returned to the land of Israel after being in Babylonian captivity. They had the goal of rebuilding Jerusalem and the temple, but they became distracted with construction of their own homes and kept postponing work on the Lord’s house. As a result, God was challenging their efforts.

The Lord described it this way: “’You look for much, but behold, it comes to little; when you bring it home, I blow it away” (Hag. 1:9). The people mistakenly thought that they could put their own financial interests ahead of God’s and still prosper. Today they would probably say, “The faster I go, the behinder I get.”

The same thing was happening in Malachi’s day. When the people failed to bring their tithes and offerings, God called it robbery. He admonished them to “bring the whole tithe into the storehouse” so he could open the windows of heaven and pour forth abundant blessing (Mal. 3:10).

This principle reaches down to us today, and it encompasses more than financial matters. Peter has given us a list of qualities God wants us to diligently seek (2 Peter 1:5-11). Neglecting them for other pursuits is shortsighted, but those who practice them will avoid stumbling.

“For even hereunto were ye called: because Christ also suffered for us, leaving us an example, that ye should follow his steps.” (1 Peter 2:21)

Some have tried to pattern their lives after that of Jesus simply by asking in every situation, “What would Jesus do?” But in the context of our text, the primary “example” that He left us was nothing less than His own sacrificial death!

Note the context: “For this is thankworthy [same word as ‘grace’], if a man for conscience toward God endure grief, suffering wrongfully . . . if, when ye do well, and suffer for it, yet take it patiently, this is acceptable [also the same word as ‘grace’] with God” (1 Peter 2:19-20).

To follow Christ’s example, therefore, is to be willing to endure unjustified suffering—even defamation and persecution—with grace and patience.

But that is not all; we must also do it in silence! “Who, when he was reviled, reviled not again; when he suffered, he threatened not” (1 Peter 2:23). “As a sheep before her shearers is dumb, so he openeth not his mouth” (Isaiah 53:7).

It is a natural reaction to want to strike back at one who has slandered or injured us, especially if such an act was an insulting response to kindness. But such a “natural” reaction was not Christ’s reaction. He could have called “twelve legions of angels” (Matthew 26:53) to His defense, but He chose to suffer in silence.

And why would He do such a thing? First, if He had not done so, we would have been lost in our sins forever. He “bare our sins in his own body on the tree” (1 Peter 2:24).

Second, He left us an example, that we “should follow his steps.” He was not just silent in His sufferings; “He suffered for us!” If we would really be like Him, we must be willing to suffer quietly on behalf of others, even when they are the ones who deserve it. This is acceptable with God! HMM

And I, brethren, could not speak unto you as unto spiritual [people], but as unto carnal, even as unto babes in Christ.

I believe that it might be well for us if we just stopped all of our business and got quiet and worshiped God and waited on Him. It doesn’t make me popular when I remind you that we are a carnal bunch, but it is true, nevertheless, that the body of Christians is carnal. The Lord’s people ought to be a sanctified, pure, clean people, but we are a carnal crowd. We are carnal in our attitudes, in our tastes and carnal in many things. Our young people often are not reverent in our Christian services. We have so degraded our religious tastes that our Christian service is largely exhibitionism. We desperately need a divine visitation—for our situation will never be cured by sermons! It will never be cured until the Church of Christ has suddenly been confronted with what one man called the mysterium tremendium—the fearful mystery that is God, the fearful majesty that is God. This is what the Holy Spirit does. He brings the wonderful mystery that is God to us, and presents Him to the human spirit.   COU066-067

Oh Lord, deliver me from carnal attitudes, actions and desires. Give me this morning a divine visitation to purify and cleanse me. Let me sense today the majesty and awesomeness of the “mysterium tremendium” as I wait upon You. Amen.

Abide in me: These words are the command of love, which is ever only a promise in a different shape. Think of this until all feeling of burden and fear and despair pass away, and the first thought that comes as you hear of abiding in Jesus be one of bright and joyous hope.

When love is heard inviting more trust, more love, the encouragement to trust, to love, goes beyond the rebuke that our love is so little, and we take heart to confide in the love that is saying, “Give me thine heart,” expecting that it will impart itself to us, and enable us to give the response of love which it desires. For indeed it must be with the blessed purpose to enable us to love Him that our God bids us love Him; for He knows that no love but what He Himself quickens in us can love Him.

Therefore always feel the call to love a gracious promise of strength to love, and marvel not at your own deadness, but trust in Him who quickeneth the dead.

The fear of the Lord is the beginning and the foundation of all true religion. Without a solemn awe and reverence of God there is no foothold for the more brilliant virtues. He whose soul does not worship will never live in holiness.

He is happy who feels a jealous fear of doing wrong. Holy fear looks not only before it leaps, but even before it moves. It is afraid of error, afraid of neglecting duty, afraid of committing sin. It fears ill company, loose talk, and questionable policy. This does not make a man wretched, but it brings him happiness. The watchful sentinel is happier than the soldier who sleeps at his post. He who forseeth evil and escapes it is happier than he who walks carelessly on and is destroyed.

Fear of God is a quiet grace which leads a man along a choice road, of which it is written, “No lion shall be there, neither shall any ravenous beast go up thereon.” Fear of the very appearance of evil is a purifying principle, which enables a man, through the power of the Holy Spirit, to keep his garments unspotted from the world. In both senses he that “feareth alway” is made happy. Solomon had tried both worldliness and holy fear: in the one he found vanity, in the other happiness. Let us not repeat his trial, but abide by his verdict.